“Nothing is perfect in this world I suppose. But the Spitfire came close to perfection.”

The Spitfire was the only Allied fighter to be in production for the duration of World War Two.

During the war Spitfires flew 835,00 sorties.

Spitfires were also capable of carrying two 250lb bombs, one on each wing or one 500lb bomb under the fuselage.

The first offensive sweep over German occupied France was flown by 66 Sqn Spitfires on 20 December 1940.

By June 1944, one in every four aircraft in RAF use was a spitfire.

In the later years of the war the Spitfire was used for low-level reconnaissance flights. Occasionally painted pink for this role, the plane that was famous for its firing capabilities was nearly stripped of all its weaponry so that it was as light as possible, and therefore, as fast as was possible.

The Spitfire first saw action over foreign soil at the evacuation at Dunkirk in 1940.

Spitfires were the first Allied aircraft to land in France at St Croix-sur-Mer, Normandy, after D Day plus 3.

Its maiden flight was 5 March 1936 at Eastleigh Airfield, near Southampton, entering into service with the RAF in 1938.

By 1939, about 10% of all Spitfires had been lost as a result of training accidents.

Despite the fame of the Spitfire and its association with the Battle of Britain, the Hurricane actually shot down more enemy planes during this battle.

The spitfire covered a total service history of 16 years, and was originally developed as a Home Defence interceptor.

The spitfire carried enough ammunition to fire for only 15 seconds.

From 1943, spitfires included modifications to carry underwing 3 inch rockets, in batteries of 4 per wing.

There were 24 basic marks of spitfires also with various sub-variants. 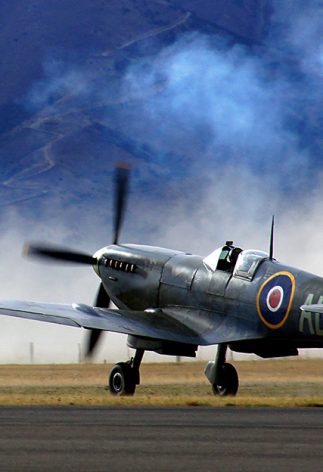 Why is it called "Spitfire"?

Though it is assumed that ‘Spitfire’ came from the aeroplane’s awesome firing capabilities, it was also an Elizabethan word that meant someone who had a fiery character. Other names considered for the aeroplane were ‘Snipe’ and ‘Shrew’.

The distinctive roof bulge in the cockpit was to allow for taller pilots.

Because so many were built, there were plenty left over from the war to use actual Spitfires during the making of the film  “Battle of Britain” (1968). Many were flown by veteran pilots.

“I gloried in every minute I spent in my beloved Spitfire.”

The very last flight of non-operational spitfires was performed  by the Temperature & Humidity Testing Flight, based at Woodvale, Lancashire, in June 1957.